Born in Marseilles, Luca lombardo studies opera singing with C. Thiolas and obtains numerous prizes; the Caruso Prize in Milan, the Georges Thill Prize, the Voix d’Or and the Francisco Viñas Prize in Barcelona. In 1989, he begins his career in Simon Boccanegra (Gabriele Adorno) directed by S.Cambreling at the Flandres Opera House with José Van Dam. Then he sings Cavalleria Rusticana (Rustic Chivalry) in Sidney and Melbourne.

Luca Lombardo immediately begins an international career which takes him to Geneva for Simon Boccanegra, to the Staatsoper in Vienna and to the Opéra-Bastille for Othello (with P. Domingo) and The Flying Dutchman. Then he sings in Lodoïska by Cherubini and TheVestal directed by R.Mutti, The Atlantide by Henry Tomasi in Marseilles, Luisa Miller in Toronto and Frankfurt, The Pearl Divers at the Scottish Opera House, Manon by Massenet at the Opéra-Bastille, Traviata ( The Woman Gone Astray) in Liège and Herodiade in Saint Etienne and Avignon.

He then takes up major parts such as Rodolfo in Bohemian Life at the Glyndebourne Festival and at the Opéra Comique, Werther in concert conducted by J.C. Casadesus as well as at the Opéra Comique in turns with A. Kraus, Hoffmann (The Tales of Hoffmann) in Toulon, King of Lahore in Saint-Etienne and Bordeaux, Cavaradossi (Tosca) at the Opéra Comique, Alfredo (The Woman Gone Astray)  in Frankfurt and Munich, Romeo (Romeo and Juliet), Faust by Gounod in Avignon, Nantes and Toulon, Sigurd by E. Reyer in Montpellier,  Don José (Carmen) in Catane, Cleveland, the Paris Opera House, the Opéra Comique, Lyon, Bordeaux as well as on tour in Japan directed by E. Sagi, Faust (The Damnation of Faust) in Prague.

Throughout the two following seasons, Luca Lombardo sings Don José again in Bonn and Vienna, Hoffmann, The Damnation of Faust and Carmen in Leipzig, The Woman Gone Astray in Tel Aviv, Tosca at the Bellini Theatre in Catane, M. Tutino’s creation “Cyrano” and Don Carlos in Metz, Die Zauberflöte (The Magic Flute) and Romeo and Juliet (Tybalt) at the Chorégies d’Orange, Werther in Saint Etienne, Marie Magdeleine with the Beethovenhalle of Bonn, Tosca in Vichy. He is also invited at the Opéra Bastille to sing Don José, the main part in The Tales of Hoffmann conducted by Jesus Lopez-Cobos and Henri de Monfort in The Sicilian Vespers. He regularly sings in concert: Requiem by Verdi in Liège and Toronto, Requiem by Saint-Saëns at the Champs Elysées Theatre and recently Pénélope by Fauré with the Orchestre National de France conducted by P. Steinberg.

During the season 2003/2004, we could hear him at the Stade de France in Paris, in Leipzig and at the Baalbeck Festival (Lebanon).He sang The Damnation of Faust in Nice  and at the Rhur Triennale (directed by Gérard Mortier), Sapho in Saint Etienne and Avignon, Werther in Massy, La Vida Breve in Metz, Madame Butterfly in Leipzig.

The season 2004/2005 opened with Don José (Carmen) at the Zenith in Toulon. Then we find him again in Giovanna d’Arco by Verdi in Rennes and Reims, Herod in Salome (Richard Strauss) in Nice in Oscar Wilde’s version.

Throughout 2007, among many different places, he sings the part of Don José in Hong Kong. In August 2007, he makes a brilliant start in the part of Manrico (Il Trovatore by Verdi). The season 2007/2008 begins with his start in the part of Teseo in Massenet’s Ariane at the Massenet Festival in Saint Etienne, Werther in Seville and Mylio in King of Ys directed by M. Plasson. He then sings Julien in Louise at the Opéra Bastille, Don José at the Rome Opera House and Cavaradossi in Tosca at the Macerata festival. During the season 2008/2009 and 2009/2010 he sings the part of Macduff (Macbeth) at the Opera House in Nice (Oct. /Nov.) and Hoffmann again in Nice in January and Singapore in March. He also sings Faust for two concerts at the Châtelet theatre in February. In April, he is Don Carlo in Karlsruhe and Pinkerton in Madame Butterfly at the Fenice before starting a tour in Japan with Carmen performed in Hyogo, Tokyo and Osaka. He sings Tosca at the Grand Théâtre de Tours, The Little Sly Vixen (Janacek) at the Opéra Bastille and Cavalleria Rusticana in Marseille, Tosca in Praga Macbeth and Hoffmann in Nice; Simon Boccanegra in Tours. During the season 2011/12 he is Don Carlo in La Plata then Guillot (Manon) at the Opéra Bastille. In may/june he sings Macbeth in Tours and Carmen in Venice. In 2012/13 he sings Carmen in Marseille and Le Mage in St Etienne (première mondiale (CD Palarretto Bru Zane). Then he makes a tour of concerts of La Damnation de Faust in Switzerlzand and sings The Tales of Hoffmann in Hong Kong and Cléopâtre in Marseille. After others Carmen in La Fenice he sings during the season 2013/14 Werther in the Opéra Bastille and Hoffmann in Tel Aviv.

During the season 2014/15 he was Prunier (La Rondine) in Tel Aviv, Le Cid (cover R.Alagna) at the Opéra Bastille and Eléazar in La Juive in Nice. 2015/16:Werther in Trieste, La Juive in Nuremberg, Carmen in Rabat.

During 2016/17 he will be Faust (La Damnation de Faust) in Santiago del Chile, Chouisky in Boris Godounov (Marseille). He will sing in Trieste (Les Pêcheurs de Perles) and Toulouse (Normanno-Lucia di Lammermoor) 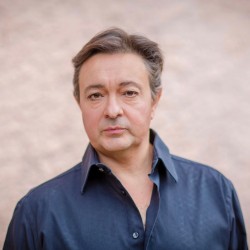 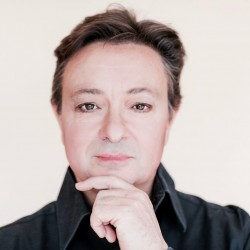