The exceptional career of Philippe Entremont began at the age of eighteen when he came to international attention with his great success at New York’s Carnegie Hall playing Jolivet’s piano concerto and Liszt’s Piano Concerto No. 1. Since then, he has pursued a top international career as a pianist, and for the last 30 years, on the podium as well.
Philippe Entremont, in the 2013-2014 season, guest conducted European and American orchestras as well as performed numerous piano and chamber music concerts. He also toured the Vienna Concert-Verein in the United States.
The 2012-13, 2011-12, and 2010-11 seasons took Philippe Entremont all over the world, with many orchestral tours including the Munich Symphony Orchestra, the Israel Festival Orchestra, the Deutsche Staatsphilharmonie, and the Shenzhen Symphony Orchestra.
His renown as an orchestral conductor and his dedication to developing orchestras’ artistic potential have led to numerous international tours, playing before full houses all over the world with the Wiener Chamber Orchestra – Europe, USA, South America, Japan, China, Australia, New Zealand etc… a tour of eleven concerts with the Orquestra de Cadaqués in capitals of countries in Asia, and a tour in Switzerland and Germany conducting the Strasbourg Philharmonic Orchestra.
As Principal Guest Conductor of the Munich Symphony Orchestra, he has led tours internationally, including the US in 2005 and 2006, conducting from the piano as well as the podium. He returned in both capacities for the Munich Symphony’s highly successful 15-concert US tour in February of 2009.He is currently Lifetime Laureate Conductor of the Munich Symphony Orchestra.
In 1997, Philippe Entremont founded the biennal Santo Domingo Music Festival, of which he was Artistic Director and Conductor of the Festival Orchestra. He is also Principal Guest Conductor of the Orquestra de Cadaqués. In 2006, in connection with the “Mozart Year,” he conducted the Tokyo-based Super World Orchestra. Philippe Entremont was also among the 10 world-class pianists chosen to perform in the “Piano Extravaganza of the Century” at the 2008 Beijing Olympic Games.
Mr. Entremont was Music Director of the New Orleans Philharmonic Orchestra between 1981 and 1986, after which he became Music Director of the Denver Symphony. He was also Chief Conductor of the Netherlands Chamber Orchestra until 2002. After having served as Music Director and Chief Conductor of the Vienna Chamber Orchestra for almost thirty years with which he has given more than 800 concerts, he is now Conductor Laureate for Life. He was also Music Director of the Israel Chamber Orchestra and is now their Conductor Laureate.
Philippe Entremont has directed the greatest symphony orchestras of Europe, Asia and America: Philadelphia, San Francisco, Detroit, Minnesota, Seattle, St. Louis, Houston, Dallas, Pittsburgh, Atlanta, Montreal, The Academy of Saint Martin in the Fields, The Royal Philharmonic Orchestra, the Orquestra Nacional de España, the Academy of Santa Cecilia of Rome, l’Orchestre National de France, the orchestras of Göteborg, Stockholm, Oslo and Warsaw, the NHK of Tokyo, the KBS Orchestra of Seoul, the Vienna Symphony and the Philharmonic Orchestra of Bergen, to name a few. He has worked with the worlds greatest soloists, both instrumental and vocal.
One of the most recorded artists of all time, Philippe Entremont has appeared on many labels, including CBS, Sony, Teldec and Harmonia Mundi, and he has garnered all of the leading prizes and awards in the industry.
His 2008 releases include Mozart’s Concertone; Concerto for Violin and Piano with the Wiener Kammerorchester; Strauss’ lieder with Sophie Koch (mezzo-soprano); and Rachmaninoff’s  Symphony No. 2 with the Orquesta del Festival Musical de Santa Domingo. In 2014 Sony issued a box of 19 CDs of all piano concerti he played under the direction of Eugene Ormandy, Leonard Bernstein, Seiji Osawa, Charles Dutoit, to name a few…
Great Cross of Arts and Science of the Austrian Republic, Commander of the French Legion of Honor, Commander of the Order of Merit, Commander of the Order of Arts et Lettres, Philippe Entremont has also been awarded the Arts and Sciences Cross of Honor of Austria.
He was for 20 years Director of the famed American Conservatory of Fontainebleau, a function formerly held by the legendary Nadia Boulanger. 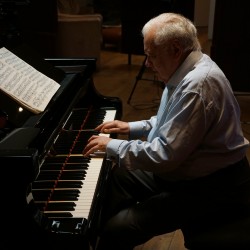