As belcanto specialist Cristina Giannelli graduated in violin at Niccolo Piccinni School of Music in Bari. She was very young when she started her singing study with Lucia Naviglio and then with Alida Ferrarini and with M° David Jones.

She attended “ Tiberio Fiorilli” drama and art course sponsored by the University of Bari and the Harmonica Accademy in Modena with S. Ganassi, A. Corbelli, F. Esposito P. Ciofi, R. Kabaivanska.

In 2007 she was Dimitra Theodossiou’s Cover in the title-role of Anna Bolena for Teatro Donizetti of Bergamo, conducted by M° F. M. Carminati  in Tokio tour; then she was Mimì in La Bohème and Donna Anna in “Don Giovanni” for Bitonto Opera Festival, conducted by M° Monterisi. In 2007 and 2008 she sang for the Verdi Festival in concert dedicated to Il Corsaro, Lombardi alla prima crociata and Giovanna d’Arco where she was a cover of the central roles. In 2009 she sang:    I Lombardi alla prima crociata, Nabucco and Il Trovatore for Verdi Festival in Parma, La Bohème in Ascoli conducted by M° Giuseppe Sabbatini.In 2010 she sang Rigoletto in Beijing, Trovatore in Parma and Nabucco in Modena, Don Pasquale in Matera.

After that she was Nedda in Pagliacci in Mumbai, Fiordiligi in Così fan tutte in Matera, Violetta in La Traviata in Bari (2012) and Leonora in Trovatore In Aslico track, Suzel in L’amico Fritz in Cagliari under M. Carminati director, and again Violetta during Japan tournée under M. Nishimoto director in 2013.

Future engagements include Traviata with the Royal Danish Theater in Copenhagen April/June 2016 and Maria Stuarda at Teatr Wielki Opera Naradowa in Warsaw May 2016. 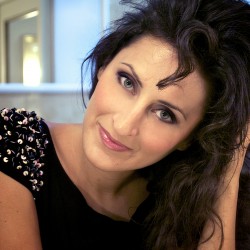 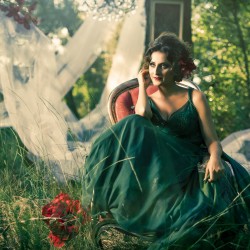 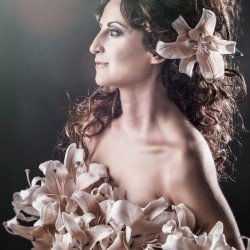