Born in Paris in 1960, Olivier Holt began playing piano and percussion before studying orchestral conducting with both European and American masters such as Jean Fournet, Franco Ferrara, Leonard Bernstein and Sir Charles Mackerras at the Hochschule für Musik in Vienna.

His recordings include a CD for the Philips Classics label with Natalie Dessay, Françoise Pollet, Olivier Charlier and Nicolas Rivencq; Théodore Gouvy’s Cantate Egill and Stabat Mater with the Philharmonie de Lorraine for the K617 label; and the world premiere of the opera Maximilien Kolbe by Dominique Probst and Eugène Ionesco, which won the “Orphée d’Or” from France’s Académie Nationale du Disque Lyrique.

Internationally, Olivier Holt made his conducting debut in the United States with the Florida Philharmonic Orchestra, in Italy with the Teatro Massimo Orchestra, and in Australia at the Melbourne Festival, in Denmark at the Tivoli Festival, and in Norway with the Bergen Philharmonic Orchestra. In December 2017 he was invited to conduct an anniversary concert celebrating Leonard Bernstein with the Frauen-Kammerorchester von Österreich in Vienna.

Since 2016, Olivier Holt has been Principal Guest Conductor and Artistic Advisor to the Orchestre Philharmonique du Maroc, where he has worked with soloists Marc Coppey, Adam Laloum, Victor Julien-Laferrière, David Guerrier, Claire Désert and Régis Pasquier. 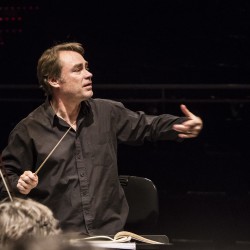