Born in Poland, Pawel Izdebski moved with his family to Boston. USA and graduated with a Master’s Degree of Arts in Voice Performance from the New England Conservatory in Boston.  In the summer of 1987 he attended the Music Academy of the West in Santa Barbara, California where he made his operatic debut as Colline in La Boheme.  He continued his studies as a member of the International Opera Studio in Zürich, Switzerland and has studied with a number of notable teachers including Armin Boyajian, Otto Edelmann, Arrigo Pola and Manfred Schenk. He is a winner of the Fifth International Luciano Pavarotti Voice Competition in Modena, Italy.

His first professional engagement was in 1989 at Lincoln Center in Philip Glass’ Fall of the House of Usher. The following year he was engaged by Zürich Opera to appear in various productions including Il Trovatore and Un Ballo In Maschera conducted by Nello Santi, as well as in Eugene Onegin and Die Zauberflöte conducted by Ralf Wekert. He has sung with such well-known stars as Pavarotti, Cappucilli, Obratzova, Araiza, Dvorsky, Vargas and Salminen.

Pawel Izdebski has toured extensively throughout Europe, the USA and Japan. His many guest appearances include Kalman Zsupan (Der Zigeunerbaron) with the Opera Irland in Dublin, Angelotti (Tosca) at the Opera de Nancy, world premiere of Karetnikov’s Till Eulenspigel at the Opera de Nantes, Zaccarias ( Nabucco) with the State Opera Prague and Cracow,  the Speaker (Die Zauberflöte) at the Bershire Opera Festival, as part of the Tangelwood Festival,  Ferrando (Il Trovatore ) in the Summer 97′ Festival Baden-Baden.  He has appeared regularly at the Heidenheim and Bad Hersfeld Summer Festivals.

Recently, he appeared as Fasolt and Hagen in Ewa Michnik’ Super Production of Das Rheingold and Gotterdammerung in Wroclaw. He sang Gran Sacerdote together with Leo Nucci and Renato Bruson in Nabucco at the renowned Music Festival in Avenches, Switzerland, portrayed Doktor in the highly acclaimed production of Wozzeck, directed by K. Warlikowski, at the National Theater in Warsaw, toured Spain with Baron Ochs (Der Rosenkavalier). Future engagements include Hagen (Götterdämmerung) in Florence and Valencia with Zubin Mehta, Gurnemanz and Titurel (Parsifal) in Valencia in Lorin Maazel, Werner Herzog production.

In addition to his opera repertoire, Pawel Izdebski is equally at home on the concert stage.  He has performed many of the great orchestral and vocal works and has received special notice for his performances in German and Slavic repertoire.  He has appeared in many concerts throughout Germany with the Rheinische Philharmonie, has sung Mahler’s Eight Symphony in Göttingen and Hammeln, Dvorak’s Requiem in Bad Hersfels. He is well known for his interpretation of Verdi’s Requiem, which he has sung with Opera Bergen, Norway, as well as, with the National Symphony Orchestra in Mexico City, and the Albany Symphony in Albany, N.Y.  He has also performed this work, together with Peter Dvorsky in the Chech Republic and Francisco Araiza in Fussen.  He has sung Bruckner’s Te Deum with the Nürnberger Symphony and Wagner’s Rienzi with the Munich Philharmonic Orchestra.  He has toured throughout Japan with the Kanazawa Symphony Orchestra and recently performed in Stuttgart with the Stuttgarter Liederkranz in the concert rendition of Verdi’s I Lombardi.

Using all the advantages of a top singer: an impressive voice of beautiful timbre, a range extending from the lowest bass notes well into the baritone range, effective stage presence, expressive acting and solid musicianship allow Pawel Izdebski to make each of his roles into a remarkable and memorable musical experience. 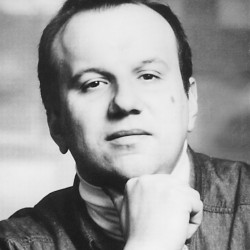