In 1995, Philippe Kahn was the winner of the International Singing Competition of Toulouse (France).

His operatic career started with Sparafucile in Rigoletto, Sarastro in the Magic Flute, Father Laurence in Roméo et Juliette and Ramon in Mireille by Gounod, Nilakantha in Lakmé, Colline in La Bohème, Zaccaria in Nabucco and Il Commendatore in Don Giovanni.

In 1989, his career led him to the Opera of Rouen where he made his debut in Don Quichotte by Massenet, and the Opéra du Rhin in Strasbourg in Aïda, Un Ballo in Maschera and Samson et Dalila by Saint Saëns, performed again at the Staattheater of Karlsruhe.  He also gave the first performance, also in Strasbourg, of the role of Caron in Orphée by Gagneux.

Philippe Khan sang in The Pearl Fishers by Bizet at the Opera of Nice, Les Fiancailles au Couvent by Prokofiev at the Opera of Nancy, Osmin in The Abduction from the Seraglio for the Mozartfest of Würzburg in Germany, Basilio in Il Barbiere di Siviglia and Fiasco in Simone Boccanegro.

During the 1994/1995 season in France, he returned to his favourite roles: Osmin and Don Quichotte, and also sang in Il Pirata by Bellini.  He was invited to the Arena of Verona to interpret Zuniga in a new production of Carmen, staged by Franco Zefirelli and conducted by Daniel Oren.

In 1996, he again sang Don Quichotte, this time in St. Gallen (Switzerland), made an appearance at the Mégaron Musicis in Athens in the role of Oreste in Il Giasone by Cavalli and interpreted Arkel in Pelléas et Mélisande by Debussy, that was touring various French theatres.

In 1997, the year devoted to Berlioz, he sang Mephisto in La Damnation de Faust for the RTVE in Madrid, L’Enfance du Christ with the National Orchestra of Spain, and Les Troyens at La Fenice and the San Carlo of Lisbon.

He again took the role of Colline at the Teatro Real in Madrid and the Opera of Valencia, returned to Mephisto in La Damnation de Faust in Budapest, sang Il Grande Inquisitore in St. Gallen, the Bailli in Werther, and Abimelech in Samson, at La Fenice, Osmin in two productions in the Parisian region, St. Bris in Les Huguenots by Meyerbeer in Bilbao, and again the role of Zuniga at the San Carlo in Naples, under the direction of Daniel Oren with whom he also sang at the Arena of Verona.

He  sings the role of Nourabbad in The Pearl Fishers in Marseille, then in Trieste, with Daniel Oren, in The Tales of Hoffman, and he will sing Daland – Fliegender Holländer in Erfurt.He  sung  Marcel in les Huguenots and the Ermit in Freischütz  in Metz , Arkel in Ankara and Damascus . In Strasbourg in Eugène Oneguin  and in Avignon  La Forza del Destino ., He ‘s also  Le Prieur in Massenent’s  « Le Jongleur de Notre Dame »  Bartholo  in  “Nozze de Figaro” in  Lausanne ; in Nice a creation by Jean-Claude Petit  Sans Famille »; again in Nice  and also in Metz Sparafucile in “Rigoletto” and  Gar Com in Laurent Petitgirard’s  Opera “Elefant Man” in Paris.

Pour les saison 2009/2012 :  « Hamlet » and » L’Attaque du Moulin »  in Metz, , Fasolt in »Das Rheingold »  in Holland, where he is going back for «  L’Heure Espagnole », « Cenerentola »  and  Platéee. . A revival of «  Barbiere «  at the Antibes Festival d’Antibes , a recording of  Laurent Petitgirard ‘s « new  opera « Guru » in Budapest,  Marquis de La force in Poulenc’s  “Dialogues des Carmeites” in France.,, a revival of the Enschede  of the “Ring”  and concerts, notably At the Orchestre Colonne in Paris and at the  RTVE  Madrid … 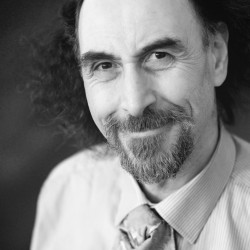