Jean-Marc Phillips-Varjabédian began studying the violin at age 5. He was admitted to Conservatoire National Supérieur de Musique de Paris at age 13. He received a First Prize in chamber music in 1984 and a violin First Prize in 1985. After studying under the direction of Gérard Poulet and Jean-Claude Bernède, Jean-Marc Phillips-Varjabédian moved to Cremona, Italy, to work under the direction of Salvatore Accardo

He then spent one year at the Julliard School in New York to study with Dorothy Delay. He has won several prizes in international violin competitions (Carl Flesch, Zino Francescatti, Lipizer, Palm Beach).

As the same time as his career with the Trio Wanderer, Jean-Marc Phillips-Varjabédian plays as soloist with numerous orchestras such as  Lille, Avignon, de Bretagne,  Caen, de Poitou-Charentes, de Cannes,   Les Siècles orchestras. He plays   frequently duo  the pianist Marie-Joseph Jude.
With the accordionist Richard Galliano, he founded a septet which played Piazolla music all over the world.

Jean-Marc Phillips-Varjabédian is Professor of  violin  at the Paris Conservatoire national supérieur de Musique. He has opened with his Trio Wanderer’s colleagues, a piano trio class at the Paris’ CRR which prepares  ensembles for concerts and international competition. 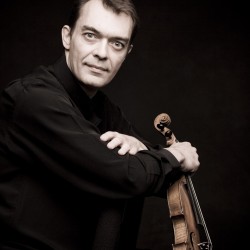