Soprano Norah Amsellem has created a unique place for herself in the world of opera, by her sense of dramatic intensity and the emotion which she confers upon her roles.

Right from the start of her career, she has sung in the most prestigious theaters all over the world:  debut at the Metropolitan Opera of New York, Milan’s La Scala, San Francisco Opera, London’s Royal Opera, Covent Garden, Vienna State Opera, Munich State Opera, Berlin State Opera, Bastille Opera, Paris, the Liceo of Barcelona, Madrid Teatro Real,, among others.

Norah Amsellem has particularly distinguished herself as Violetta in La Traviata, a role she has sung at Covent Garden, Vienna Staastoper, Munich Staatsoper, Berlin Deutchoper, Teatro Real in Madrid, Teatro Communale di Bologna, as reported in the article in the Financial Times. “… an exceptional interpretation, melding a gracious and charming physic with an impeccable technique and a rare emotion”

The DVD of Traviata by BBC Opus Arte, recorded in Madrid in 2005, staged by Pier Luigi Pizzi, immortalized her prestation in a production of reference recompensed by the Gramophone Award.

This recording earned spectacular reviews, and according to L’Opera, “A triumphant success. Norah Amsellem is an absolutely exceptional Violetta, a complete and fascinating artist”.

Massenet’s Manon has also become a role in which she has distinguished herself. She has sung it in Vienna Staatsoper alongside Rolando Villazon, at the Teatro San Carlo of Naples with Marcello Alvarez, and will return to Vienna to sing it with Jonas Kaufmann and recently with Roberto Alagna.

Her sensitive and vibrant interpretation of Mimi in La Boheme has delighted audiences in Naples, Tokyo and  Madrid. She has recently recorded the role with the Atlanta Symphony conducted by Roberto Spano for TELARC, CD that was released in summer 2008.

“Liu” in Turandot, is also a role which she has sung all over the world – Metropolitan Opera New York, San Franscisco, La Scala, Teatro San Carlo de Naples, San Carlo Felice of Genoa, Florence and on tour in Japan with the Maggio Musicale Fiorentino conducted by Zubin Mehta, all widely acclaimed: “In her debut Sunday, Norah Amsellem delivered the most alluring Liu this house has probably heard in decades. A former Merola Program participant, the French born soprano is simply an exquisite artist, a sympathetic actor and a singer who believes in taking chances and emerging triumphant. Amsellem’s serenely spun high note, tapering into infinity, and the end of ‘Signore, ascolta” yielded a kind of golden age pleasure.” San Fransisco Examiner.

Other major roles in which she excels include Gilda in Rigoletto, which she has sung in New York, Met in the Parks, Munich, Orange and Toulouse; Leila in the Pearl Fishers at the San Fransisco Opera;,Juliette in Gounod’s Romeo and Juliette (Vienna Staastoper); Countess in the Mariage of Figaro (Glyndebourne); Norina in Don Pasquale,; Adina in l’Elisir d’amore are other major roles in which she demonstrates her range of sensitive color and imposes her talent as a distinctive and subtle singer, actress and musician.

The role in which she first triumphed is “Micaela” in Carmen, which she has sung on the most famous international stages, with artists such as Placido Domingo, Roberto Alagna, Rolando Villazon, amongst others.

In the future her repertoire will include new roles: Mathilde in Guillaume Tell, Thais (title role), Elvira in the Puritains by Bellini, Mireille (title role), Marguerite in Faust, Desdemona in Verdi’s Otello.

Her EMI recording of Les Cantates de Rome by Maurice Ravel under Michel Plasson was awarded the Prize of the Académie Charles Cros.  In summer 2004, Claves Records released Ms. Amsellem’s solo recording of “Mélodies Françaises” with pianist Dalton Baldwin, and in Febuary 2005 she recorded a CD of Verdi songs with Pianist Lydia Jardon on the label Ar Re-Se.

Born in Paris, France, Norah Amsellem started her musical studies at the age of five when she started playing the Harp and Piano. At the age of eight, she integrated the French children’s choir “Maitrise de Radio France” where she had the opportunity to perform with the most well known conductors and artists. During that time, she participated in the recording, with the children’s chorus, of the film of Carmen staring Placido Domingo and Julia Migenes-Johnson and La Boheme with Jose Carreras and Barbara Hendrix. As a child she also recorded various solo roles with the Maitrise de Radio France. She received her end of studies diploma in classical harp and musical formation, and then went on to graduate school in Princeton, USA, where she obtained a Bachelor of Arts. She continues to perfect her vocal technique with Lorraine Nubar in New York City and role interpretation with renowned soprano Renata Scotto. 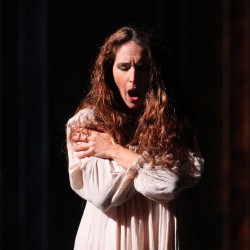 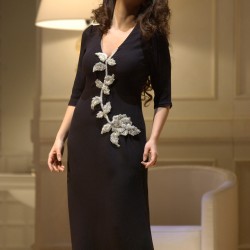 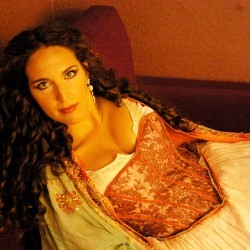