David Salmon and Manuel Vieillard have been forming the Geister Duo for almost 10 years, and are now considered one of the most promising duos of their generation.

Amongst their forthcoming concerts, one can note Poulenc Concerto for two pianos with the Orchester National d’Ile de France at the Salle Pierre Boulez of the Philharmonie de Paris, as well as at the opening of the symphonic season of the Philharmonisches Orchester der Stadt Ulm in Mozart Concerto for Two Pianos. In recital, they are planned at the Berlin Philharmonie, the Berlin Konzerthaus, the ElbPhilharmonie Hamburg, the NDR Funkhaus in Hanover and the Robert-Schumann Saal in Düsseldorf, as well as at the Seine Musicale, the Théâtre des Champs Élysées, and the Bozar in Brussels.

Their encounter gave rise to the desire to work in depth on the duo repertoire, not as two soloists meeting for a concert, but as a real chamber music ensemble. Each completing his solo piano studies, one at the Hanns Eisler Hochschule in Berlin, the other at the CNSMD in Paris (Paris Conservetoire), from which they graduated with flying colours and both won international competitions, they perfected their duet skills with Emmanuel Strosser at the CRR, and then finally devoted themselves to it full-time with Claire Désert in the master’s degree in chamber music at the CNSMD in Paris.

Invited as an ensemble in residence to the international festival of La Roque d’Anthéron in 2018 and 2019, they have also benefited from the advice of Christian Ivaldi and the Trio Wanderer.

Committed to the dissemination of contemporary repertoire, they were invited in 2019 to the Académie de Villecroze by Jean-François Heisser and Jean-Frédéric Neuburger for masterclasses on works of the 20th and 21st centuries. In 2020 they joined the prestigious Tal & Groethuysen duo class in the Postgraduate course at the Mozarteum in Salzburg, Austria, where they further developed their research as a duo.

The Geister Duo is planned for concertos in Germany and France, and will be performing a recital tour taking them to the ElbPhilharmonie Hamburg, NDR Funkhaus Hannover, Robert Schumann Hall in Düsseldorf, Christophori in Berlin, Seine Musicale and Théâtre des Champs Eysées in Paris, Bozar in Brussels, etc.

In recent months, they have toured in the Czech Republic, at the Cologne Philharmonic accompanied by the WDR Orchestra conducted by Cristian Macelaru, given recitals at the Seine Musicale and at the Festival International de la Roque d’Anthéron, at the Promenades musicales du Pays d’Auge, and at the Soirées du Castellet.

The Geister Duo’s next recording devoted to Debussy and Stravinsky is announced for early 2023 (Mirare/Bechstein).

The Geister Duo is supported by the ADAMI and the Safran Foundation for Music. 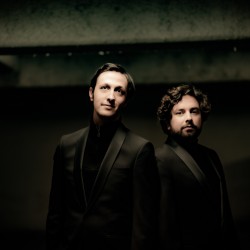 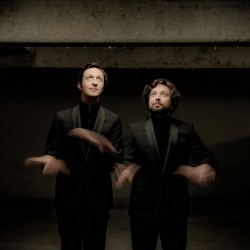 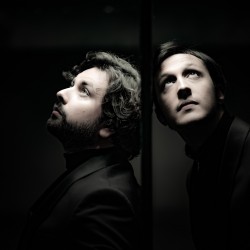