François Le Roux began his vocal studies with François Loup at the age of 19, and later he studied under Vera Rosza and Elisabeth Grümmer at the Opéra Studio, Paris. He is a winner of international competitions in Barcelona (“Maria Canals”), and Rio de Janeiro.

He was a member of the Lyon Opera Company from 1980 to 1985 since when he has been a guest with all the major European opera houses and festivals. He has appeared at the Glyndebourne Festival (as Ramiro in Ravel’s L’Heure Espagnole), in Hamburg and Oslo (as Marcello in Puccini’s La Bohême), in Frankfurt (as Orestes in Gluck’s Iphigénie en Tauride), at the Royal Opera House, Covent Garden, London (among other parts as Lescaut in Massenet’s Manon, as Papageno in Mozart’s Magic Flute conducted by Colin Davis, as Figaro in Rossini’s Barbiere di Siviglia). In 1988, he made his debut as Valentin in Gounod’s Faust at the Paris Opera. In 1987, the role of Don Giovanni played at the Paris Opera-Comique enjoyed a real triumph and brought him the French critics’ award “Prix de la Révélation de l’année”. As Don Giovanni Le Roux has also appeared in Zürich (under Nikolaus Harnoncourt) in England, Scotland and in Spain.

For the first time in 1985 he was cast in the role of Pelleas in Debussy’s Pelléas et Mélisande, and at once was appointed by critics “the greatest Pelleas of his generation”. He has played this role over a hundred times on the most renowned operatic stages throughout the world and has recorded it for Deutsche Grammophon under Claudio Abbado ; since 1998, he has switched to the part of Golaud in the same opera, to great acclaim, in Paris, in Bordeaux, and at the famous Teatro Colon in Buenos Aires (Argentina) ; it was him who was Golaud, for the centenary of the world premiere of the opera (30 april 2002), at the Paris Opera-Comique, and recently, for the Russian staged premiere ever of the opera.

Besides, François Le Roux gives numerous recitals accompanied by such renowned names as Irwin Gage, Graham Johnson, Roger Vignoles, Noël Lee and Jeff Cohen, and also conducts master courses dedicated to the interpretation of French songs. Since 2006, he is teaching at the Académie Maurice Ravel in Saint Jean-de-Luz, a position first detained by the famous Pierre Bernac. He is artistic Director of the “Académie Francis Poulenc in Tours”, where students are taught every year (in August) the interpretation of French Song, and has been organizing the « French Song” Concert Season of the Bibliothèque Nationale de France ” in Paris between 1997 and 2002.

He recently sings the part of ‘Golaud’ in Debussy’s Pelléas et Mélisande at the at the Stanislavski Theater in Moscow (directed by Olivier Py, and conducted by Marc Minkowski), and ‘the Clock’ and ‘the Tomcat’ in Ravel’s “L’Enfant et les sortileges” at the famous Teatro San Carlo in Naples (conducted by Jeffrey Tate). Among other events, he will sing Mahler’s Das Lied von der Erde in Paris (at the ‘Musée d’Orsay’), Dvorak’s Biblical Songs in Besançon (conductor Peter Csaba), as well as many recitals and masterclasses in Europe and America, including a series of Schubert’s ‘Die Winterreise’.

2010/2012  “ L’Enfant et Les Sortilèges “ at the Berlin Philharmonic Orchestra,( S.Rattle)  and at la RAI Torino,  a production of “ Vec Markopoulos “ in Amsterdam,  “Cendrillon”  by Massenet in Marseille, a creation of Duhamel in Metz,  “Pelleas et Mélisande” at the Deutsche Oper am Rhein ;“Magdalena”  by Villa-Lobos at the Châtelet Paris, a creation in Metz by Pierre Thilloy, Pelleas  in Helsinki and in Moscow; “La Vie Parisienne” in Lausanne and many concerts  and recitals… 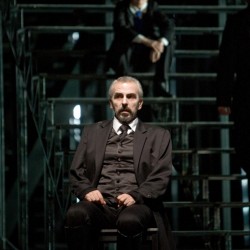 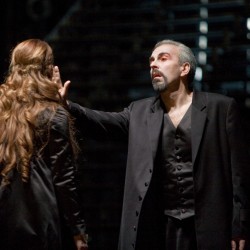