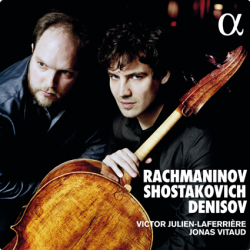 Winner of the first International Cello Concours Reine Elisabeth – RTBF in 2017 and named ‘Soloist of the Year’ by Les Victoires de la Musique Classique in 2018, Victor Julien-Laferrière launches his collaboration with Alpha with an all-Russian programme. For his first album he has decided to record the sonatas of Rachmaninoff and Shostakovich, two pinnacles of his instrument’s repertory, alongside the pianist Jonas Vitaud, with whom he enjoys a close rapport. A rare piece by Russian composer Edison Denisov completes the disc: the Variations on a Theme by Schubert, composed in 1986.